Other Water Heater Fires in the News

Water heaters are known to be a potential fire hazard, especially when flammable materials are stored in the vicinity.  In July, a San Antonio house fire began when a man was attempting to repair a water heater using spray-on foam.  My San Antonio reported that the man suffered minor burns.  In May, CBS affiliate WREG covered a house fire in Tennessee that investigators traced to a water heater.  Flames spread to the attic and the rest of the home.  A volunteer firefighter living in the home saved the lives of his own and the family was okay aside from a minor burn to the son’s face.  A family in Ghana was not as lucky.  According to Graphic Online, two children died earlier this week in a house fire.  While the cause has not been officially determined at the time of this writing, neighbors suggest that two water heaters may have been to blame. 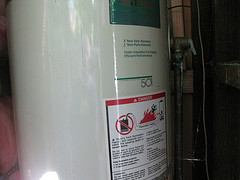 Do-it-yourself website The Family Handyman lists appliances, including water heaters and clothes dryers, among its Big 7 list of common causes of preventable home fires.  According to the site, lint in dryers and combustible materials stored near gas water heaters are the leading culprits of appliance fires which account for 7% of home fires and 4% of home fire deaths (stoves and heaters are in a separate category).  While that sounds like a small percentage, it is anything but small to those impacted by these fires.

The website suggests marking off and maintaining a three-foot “combustible free” zone around a water heater.  Other causes of water heater fires include defective equipment and installation/maintenance problems.  Always hire professionals, the cost is nothing compared to what you risk.

When a fire is caused by the negligent or willful acts of an individual or corporate entity, the injured have a right to compensation via a civil claim.  A civil suit involving such a fire might include negligence, product liability, premises liability, and even landlord/tenant principles.  The Brod Law Firm is experienced in all these fields and is honored to help fire victims recover the money they are due.  We have offices for our fire injury law firm in Santa Rosa, San Francisco, and Oakland to serve those injured by fire and/or smoke throughout Northern California.

We will continue to watch news reports and talk to people affected by this year’s wildfires.  We hope the fires stop forming and that the firefighters gain the upper-hand on those currently burning.  Our thoughts are with everyone impacted by these terrible blazes.